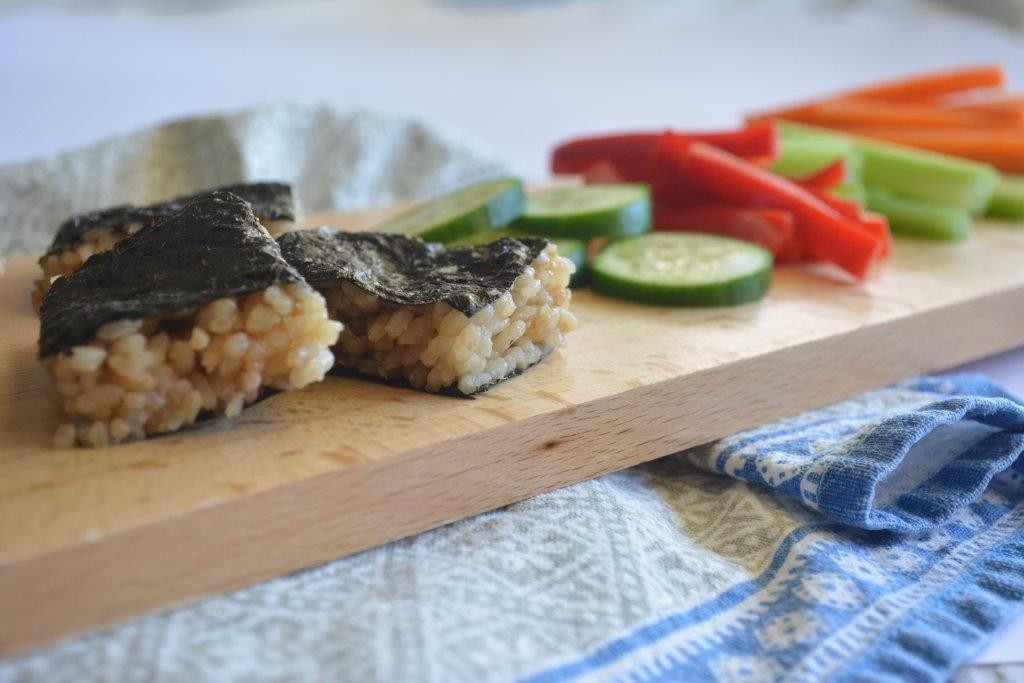 It has to be said, as much as I love my kids and even though I’d do just about anything for them, I draw the line at rolling sushi for their lunchboxes.

Don’t get me wrong – I used to roll sushi, BC (“before children”). But almost a decade has passed since I was BC and along with it those carefree childless days of having buckets of time to spend perfecting foodie techniques.

It’s a shame, really, because sushi is such a great gluten-free lunchbox food.

So I got to thinking about sushi and how I might be able to make it in a flash. And so the sushi square was born. It would be easy to double the quantities of the rice and serve some for the evening meal, then use the rest for the squares. To simplify things even more, I dispensed with the traditional rice vinegar dressing and just stirred through some gluten-free soy sauce.

It works – the kids love it, it’s quick and easy, and it tastes a-okay. Because it’s really just rice and nori, I recommend sending these squares in the lunchbox with some cooked and sliced chicken breast and vegetable sticks. And voilà! You’ve just created a nutritious and balanced lunch.

Put rice into a large bowl with 2 cups boiling water. Cover with plastic film and microwave on high for 8 minutes, or until liquid is completely absorbed and rice is cooked.

Remove film and allow rice to cool a little. Add soy sauce (or tamari) and stir until well-combined.

Place one nori sheet, shiny side down, on a chopping board. Cover nori sheet with rice to a thickness of 1.5 to 2 cm, ensuring that it is evenly spread, especially along edges of the nori. Using the back of a spoon, press down on rice so that it is firmly in place.

Put second nori sheet, shiny side up, on top of rice and gently press down so that it is firmly in contact with the rice. Using a very sharp knife, cut into 4 cm squares, wiping the knife regularly to ensure that it won’t stick to the sushi and that it will cut cleanly.

Cover and refrigerate for at least one hour or until needed.