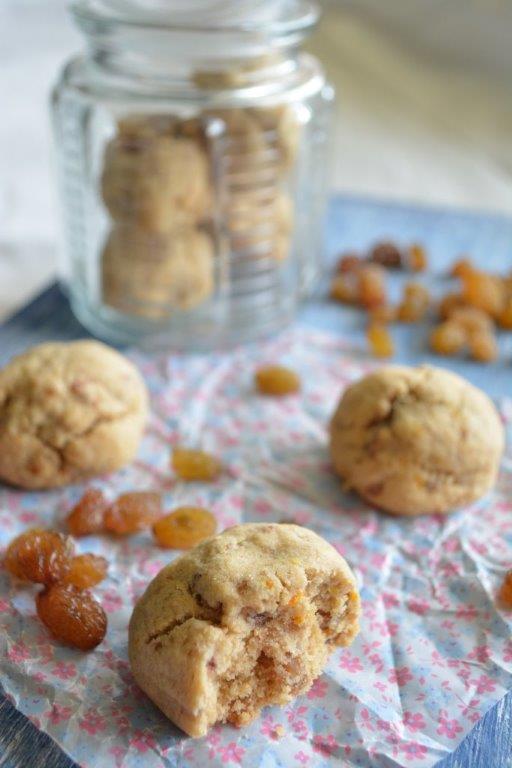 Ah, nostalgia! Do you remember rock cakes? I learned how to make rock cakes at school when I was about 13 years old. They stand out in my memory because it was the first time I learned a baking technique – how to rub butter into flour.

And because they were simple and straightforward to make, I tended to make them regularly, thanks to my Mum giving me free run of the kitchen whenever I felt like it (although I learned early on that such freedom also came with the expectation that I’d clean up after myself. Too right!)

I’d forgotten all about rock cakes until a few months ago when a friend of mine served some freshly baked rock cakes for afternoon tea. Since then, I’ve been wanting to develop a gluten-free rock cake recipe.

If you’ve never heard of rock cakes, I should point out that they don’t get their name because they are as hard as rocks! No, no, no. According to Wikipedia, they get their name from their appearance – they come out of the oven looking a bit rough, much like a rock. This is part of their charm, especially for a 13-year-old beginner baker. They don’t need to be perfect little cakes or cookies. Just plonk them on the tray and however they land is how you cook them.

To develop this recipe, I started with the legendary Green and Gold Cookery Book, which has a story in itself – in 1923 it was compiled as a fundraiser for an Adelaide private school. It was a runaway success and more than 75 years later, it is still in print. It’s brilliant for old-fashioned recipes including jams, sauces, cakes and even “invalid cookery.” I grew up using my Mum’s copy and then bought my own copy about 10 years ago. I’ve also been known to give copies of the book as gifts to people who love cooking and don’t mind old recipes. If that’s you, grab a copy – you won’t be sorry.

It was a bugger coming up with the final recipe, I have to say. The first time I made them, they worked like a dream. The next 3 attempts were disasters. Finally, on the fifth attempt, they worked. They’re meant to be dense, but using a little baking powder gives them a lighter and more palatable texture.

I used a food processor instead of rubbing the butter into the flour. It’s a little bit of a shame as there’s nothing like getting into your baking with your hands, but when it comes to gluten-free flour, you need to add moisture to stop the final product from shattering to smithereens. My answer to this is to process the sultanas with the mixture. This adds moisture and strength to the mix and you’ll still get lovely chunks of sultanas throughout.

One of the things I love about this recipe is the flavours – sultanas, orange zest and mixed spice. It’s a classic Christmas flavour combination which is lovely for this time of year.

Send them in your kids’ lunchboxes for a recess-time snack and freeze the rest of the batch for later. There’s nothing like being able to freeze a large batch of baking – it makes the effort really worthwhile.

Add orange zest, egg and sultanas. Process again until mixture comes together in a ball and you can still see chunks of sultanas.

Drop heaped teaspoonfuls of the mixture onto trays, allowing room for spreading.

Bake for 13 minutes. (If necessary, bake one tray at a time to keep oven temperature even).