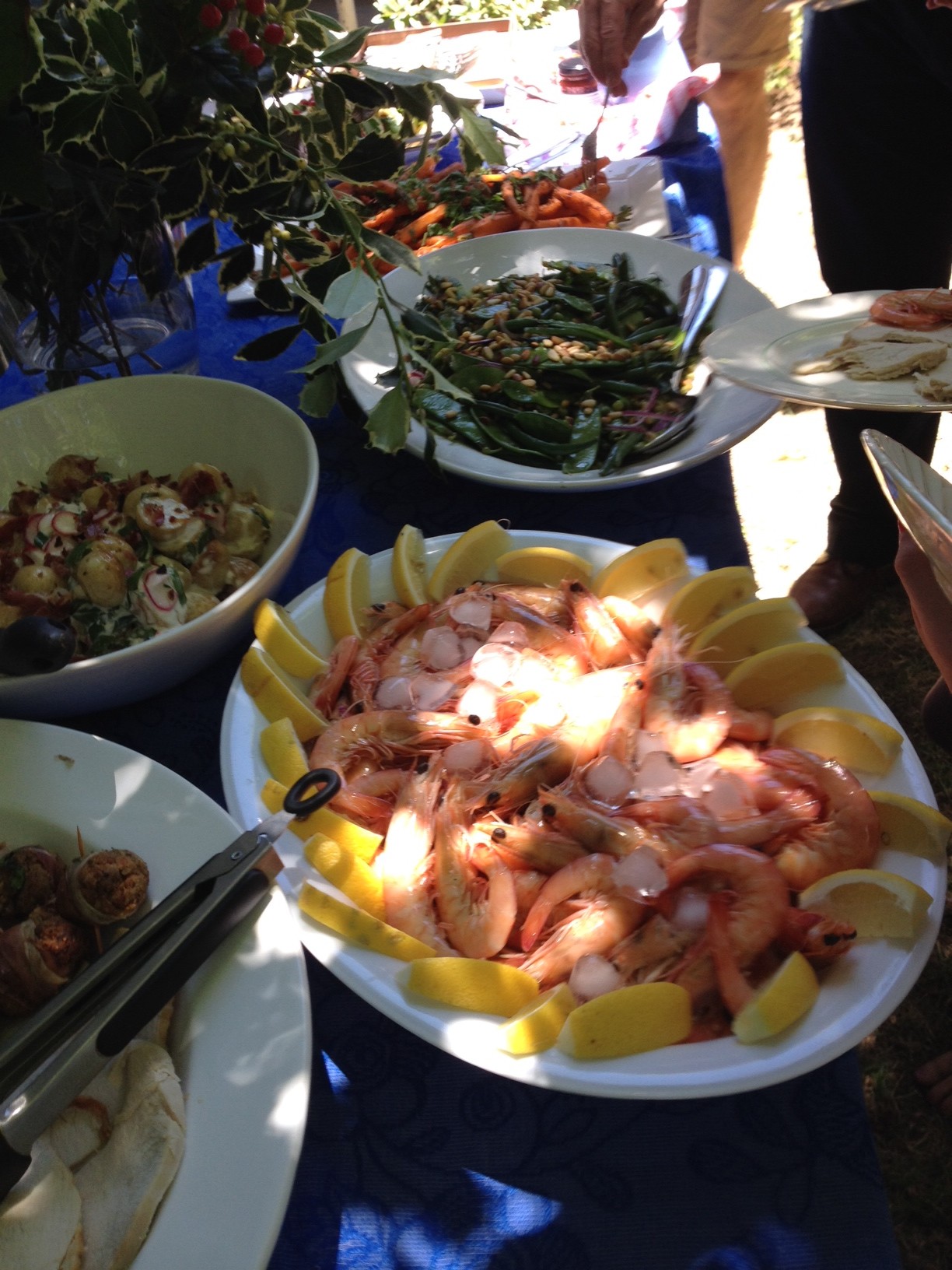 Hello! Sorry for the break between posts. There’s been a little bit going on of late – I needed to take some time out to recover from some minor surgery. No biggie, but the anaesthetic took a little while to work its way out of my system. Since then, I’ve also been tied up with end of year stuff for school and kindy, trying to get ahead with my writing deadlines so that I can have a Christmas break. Then, to top it all off, my oven’s thermostat got very dodgy so I really can’t properly develop any new recipes until that’s fixed (hopefully next Tuesday. Fingers and toes crossed!).

I’ve also just paused to reflect on the devastating bushfire that ravaged the area in which I grew up. It was a horrifyingly early start to the bushfire season and I hope it’s not an indication of things to come.

Anyway, the other day when I was thinking about how I’ve neglected my blog lately, I came across some pictures of last year’s Christmas day. Now that we’re on the Christmas countdown, if you’re hosting Christmas lunch or dinner this year you might be wondering what to cook. I thought it would be a good time to post this menu, just in case it helps you with your planning and preparation.

Here in Australia, Christmas is in summer. I can’t recall too many Christmas Days that have been stinking hot – normally we have lovely mild weather. Many people will serve a traditional roast turkey meal with steamed pudding for dessert, despite the season. I’d probably do the same, except my kitchen is old and my oven is small so I’m not really set up to serve a hot roast meal to a crowd.

Instead, I opt for cold meats and salads made from roasted and steamed vegetables. That way, there’s still a little bit of tradition but it’s adjusted to suit the climate. It also has the huge advantage that most of the food prep and cooking can be done the day before. It’s simply a matter of assembling things on the day.

I should also say that seafood is huge (and I mean HUGE) on Christmas Day. Fishmongers are about the busiest of all food shops in the lead-up. Yup, we just love our seafood, and lots of it. So my Christmas lunch menu also features seafood.

I don’t worry about special catering for the kids on this occasion. For a start, they’ve probably gorged themselves on cherries and chocolates (more traditional Aussie Christmas fare) while waiting for the main meal. If they can just eat a little bit of this or that from the lunch spread and that’s okay with me. Catering especially for kids is just too hard on such occasions anyway, and really, the sooner they learn how to tuck in like everyone else, the better.

Some of these recipes are approximate or lacking in detail because in the rush last year, I didn’t get to properly record what I was doing – I just kept a note that I made of the menu and that was that. I had a crowd of about 20 people to feed.

So here it is, for what it’s worth. My gluten-free Christmas feast.

In Australia, nothing says Christmas more than cherries. So there are cherries a-plenty on Christmas day. I put out bowls of cherries and cashew nuts (because luckily no-one in the family suffers from a nut allergy), along with some wrapped gluten-free chocolates.

Instead of serving an entrée, I asked my Mum and Sister-in-Law to do the starters. My Mum made some lovely fried salt and pepper squid, tossed in gluten-free corn flour and a salt and pepper spice mix. She shallow-fried them in batches. Ahem, there were no leftovers!

My Sister-in-Law brought a range of gluten-free finger foods. I can’t now remember the specifics, except that they were polished off in record time. Some other ideas for finger food are:

These recipes can all be found in my eCookbook.

I bought a rolled turkey breast and on the morning of Christmas Eve, I rubbed it with olive oil and seasoned it with salt and pepper. I roasted it according to my butcher’s instructions and when completely cool, I sliced it.

I had also ordered a leg of ham and sliced that in advance of Christmas Day.

I served the turkey and ham on a large platter, along with Maple-Glazed Stuffing Balls. I prefer to serve the stuffing element separately – it’s far easier for me to manage everyone’s tastes.

The stuffing balls are an amazing recipe – packed to the brim with great flavours. I found the recipe in a Better Homes and Gardens 2012 Christmas Magazine. I simply did a direct swap of the gluten breadcrumbs with gluten-free bread crumbs and they’ve worked a treat every time. For a similar recipe, try these Cranberry Stuffing Balls – use 2 ½ cups of gluten-free breadcrumbs as a substitute.

I’m not much of a seafood cook, so I simply served the prawns naturale – in their shells with wedges of lemon. Of course, finger bowls were essential!

And then the salads.

I’m a salad junkie – I just love a salad. Some people only know me for my salads. Thankfully, the extended family loves my salads as well, so I went to town!

I found this recipe for Moroccan Carrot Salad. It was beautiful. Just young carrots, boiled, and dressed with spices and red wine vinegar. Just be careful not to over cook the carrots (I’ve been there)!

I made a big potato salad by halving some baby potatoes and then tossing through olive oil, salt and pepper. I roasted them in a moderate oven for about 40 minutes and then turned the temperature up to high for a further 15 minutes to make them crispy and golden.

I grilled about 8 slices of pancetta until crispy and once cooled, broke them up into small pieces.

Once the potatoes had completely cooled, I added sliced radish, sliced spring onions (the green part only), torn basil leaves as well as the pancetta. I then added gluten-free whole egg mayonnaise and some fresh lemon juice and gently stirred to combine all ingredients.

This salad was roughly based on a recipe that I saw in delicious. Magazine a few years ago. I got too busy to look it up, so relied on my memory to recreate it.

I trimmed some green beans and snow peas and then blanched them and refreshed them under iced water. I also blanched and refreshed some frozen green peas. I drained everything thoroughly and put them in a large salad bowl. I added some thinly sliced red onion, torn fresh mint leaves and ground black pepper. I tossed it all with olive oil and red wine vinegar.

I know I’ve come across a roast cauliflower and dukkah salad before, but I just can’t think where. I couldn’t find it on a google search, so I just made it up.

I chopped two heads of cauliflower into florets and then tossed them in olive oil, salt and pepper. I roasted them in a moderate oven for 20 minutes and then on high for a further 10-15 minutes until a little bit browned.

I allowed the cauliflower to cool completely and then added baby spinach leaves, thinly sliced green apple, and pomegranate seeds (because they look so festive). I tossed through some lemon juice and olive oil and then sprinkled over about 2 tablespoons of dukkah and a few extra pomegranate seeds.

I really went to town with the condiments as I had made so many preserves to use as Christmas gifts. In addition to cranberry sauce and mustard, I also served homemade tomato relish, plum sauce, apple sauce and onion marmalade.

Despite my practice of serving cold food, we always have a traditional steamed pudding. I use a recipe that has been in my Husband’s family for decades – it’s been made every year for around the past 80 years. About 15 years ago, my Husband’s Aunt passed the recipe on to me and now every year, in mid to late November, I spend a day making the pudding and then leave it to marinate in brandy for weeks until the big day.

It’s probably a bit late to share the recipe with you this year, but maybe I’ll be organised enough to share it next year in plenty of time.

This year, I’ve converted the pudding to gluten-free and it’s worked like a charm. The great thing about Christmas puddings is that they’re so dense, so a direct replacement of gluten flour and breadcrumbs with their gluten-free counterparts really works.

My advice is to look for a recipe that measures flour and/or breadcrumbs by weight (instead of cup measurements) and use exactly the same measurements. Suet recipes are great because the high concentration of fat really lends moisture. Also, the more eggs the better. If the recipe calls for two eggs, that’s okay. But three or four eggs are even better.

The wonderful Green and Gold Cookbook, now 91 years old, has a couple of great recipes for Christmas (or plum) pudding.

We serve the pudding with custard (of course, with a sneaky dash or two of brandy). You can find a custard recipe on page 22 of my eCookbook. Even though it uses egg yolks, it’s a simple recipe and so superior to store-bought custard.

I also serve a cold dessert for those who prefer not to eat the pudding. In the past, I’ve served pavlova dressed with whipped cream and loaded with berries. You could also try my recipe for Gluten-free Spiced Cherry Icecream Cake. Delicious.

After that, I usually just serve coffee and tea as everyone’s had far too much to eat!