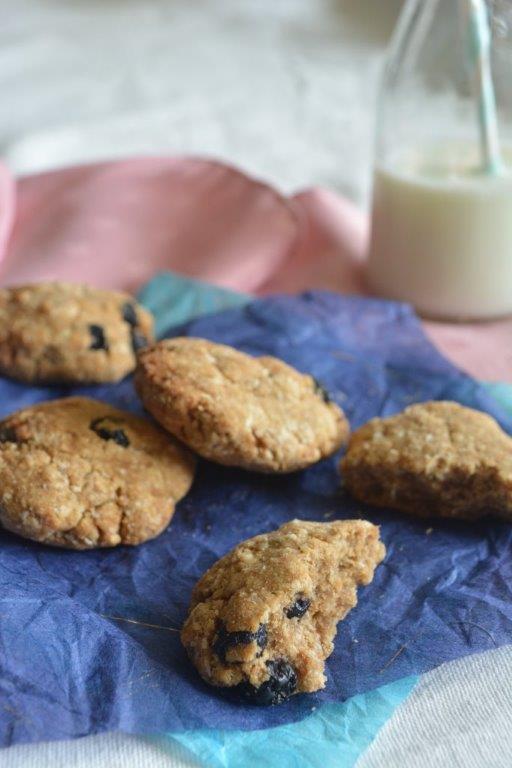 Well, I’ll be the first to admit that I struggle to make attractive-looking cookies. They usually taste great, but their appearance leaves a bit to be desired.

When I was photographing these cookies earlier today, I had three little helpers surrounding me telling me how to make them look better. I don’t think their advice really helped – there was a fair amount of styling and light manipulation going on to try and detract from the ordinariness of the cookies!

So you’ll just have to take my word for it. They are yummy – the dried blueberries really give them a lift. I used coconut sugar in this recipe, but do a direct swap for brown sugar if you can’t get your hands on any of the coconut variety. I was interested in layering the coconut flavours – coconut flour, coconut sugar and desiccated coconut – a little like a Sarah Lee creation (“Layer upon layer upon layer…”)!

After reading this post by Gluten-free Girl, I was interested to know whether my cookies would turn out better if I rested the dough in the fridge overnight. I did it twice and both times the dough became crumbly, as described by Gluten-free Girl, yet the mixture came together really well and cooked nicely. I didn’t test a batch of cookies without resting the dough, so I can’t comment on the extent to which it improved. But I can say that the baking process was much easier and quicker when I knew that I only had to whip up the dough on one night. The cookies could be rolled and baked the next day in a flash. I’m all for doing things quickly and easily, so I have no problems with dividing the baking process by resting the dough.

But if you need the cookies then and there, by all means skip the resting stage and roll and bake them immediately.

These cookies can be used  for a recess-time refuel. I’ve got a batch in the freezer for quick and easy school lunchboxes once we’re back from school holidays.

Make a well in the centre of the mixture and add eggs, butter, vanilla essence and blueberries.

Mix until combined. Cover bowl with plastic film and refrigerate overnight, or for at least 4 hours.

Remove bowl from refrigerator and microwave for 20 to 30 seconds to loosen the mixture.

Press the mixture together and roll into dessertspoon-sized balls. Flatten between the palms of your hands and place on tray, allowing room for spreading.