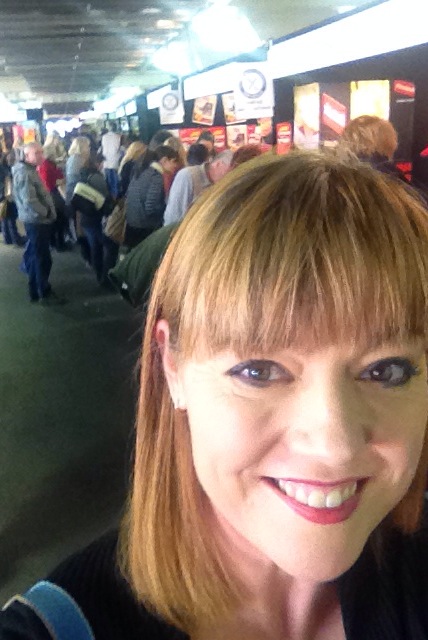 Well, there was a gluten-free buzz in the air this past weekend. Gluten Matters, South Australia’s first gluten-free expo, took place on 25 and 26 July 2015. It was a runaway success.

Organisers weren’t really sure what to expect, but they estimate that on the Saturday more than 2,000 people attended and more than 1,000 on the Sunday. That’s huge numbers for Adelaide, especially for such a specialised target market. You can see from the photo above that it was busy. I’m not into taking selfies, but on this occasion I couldn’t resist!

What was really amazing about this expo was that it was organised by a legion of volunteers, with Suzanne Flint at the helm. It was an undertaking not for the faint-hearted. There were about 50 exhibitors, as well as guest speakers, and cooking demonstrators. I can’t even wrap my head around how much effort went into organising the event, especially for people who basically got it done in their spare time.

I was lucky enough to be involved, doing two cooking demonstrations and a presentation on the Sunday. Why? Because Sunday was kids’ day, and I’m all about the kids!

I had a really great time, actually, even though I had quite a bit to get through on the day.

For my first cooking demonstration, I decided to make a recess-time lunchbox recipe and my Apricot Squares really hit the mark. I sent the “here’s one I prepared earlier” plate of squares out to the audience while the one I’d made during the demo was in the oven. Empty plate returned with requests for more. Yahoo! I can’t tell you how great it is to get that kind of feedback about my recipes from complete strangers. If you’d like my Apricot Squares recipe, it’s in my e-Cookbook, along with plenty of other delights.

I should just comment about the apron I’m wearing in the picture above. It was made for me by my Great-Aunt when I was about 7 years old. And yes, I still wear it all the time (much to my Mum’s amusement – you should have seen her reaction when she saw me wearing it on Sunday). It’s just the right weight, length, fit. It doesn’t annoy me and, well, I’m just fairly attached to it.

Next, I co-presented a talk with Suzanne Flint. Suzanne is an accredited practising dietitian and also has an adult daughter with Coeliac Disease. (Her daughter was diagnosed around the age of 10). Basically, Suzanne really knows a thing or two (and then some) about Coeliac Disease.

Our topic was Children and Coeliac Disease, and we covered a mountain of stuff in 30 minutes, including setting priorities, home life, gluten-free challenges outside of the home, being organised, being a food safety expert and teaching your child gluten-free life skills. We could have talked for hours, actually, and I’ve got to say that some of my favourite issues were school lunches (of course!), shared lunches, birthday parties, sausage sizzles, school camps and eating out.

I then presented another cooking demonstration, this time with a lunch-time lunchbox recipe. I chose one of my kids’ favourites, Noodle Nests, which also happens to be pretty simple to make. The recipe is in my e-Cookbook.

I’d also prepared some earlier and had them ready for the audience to try. No leftovers. Hurrah! I also served up more of the Apricot Squares that had just come out of the oven. Demolished. Yahoo! There’s surely no better feedback!

At the end of my demonstrations, I was very honoured to meet Adelaide foodie and gluten-free legend Rilka Warbanoff. Rilka is founder and owner of the business Rilka’s Real Food based in Hahndorf in the beautiful Adelaide Hills. Rilka runs a gluten-free and diabetic friendly cooking school, is a cookbook author, operates a gluten, wheat and yeast free bakery and also has regular cooking segments on local radio. She has developed her own range of products. So if you think I look a little star-struck in the photo above, you’re probably right. It was amazing to come face-to-face with such a food legend.

But the fun didn’t stop there. 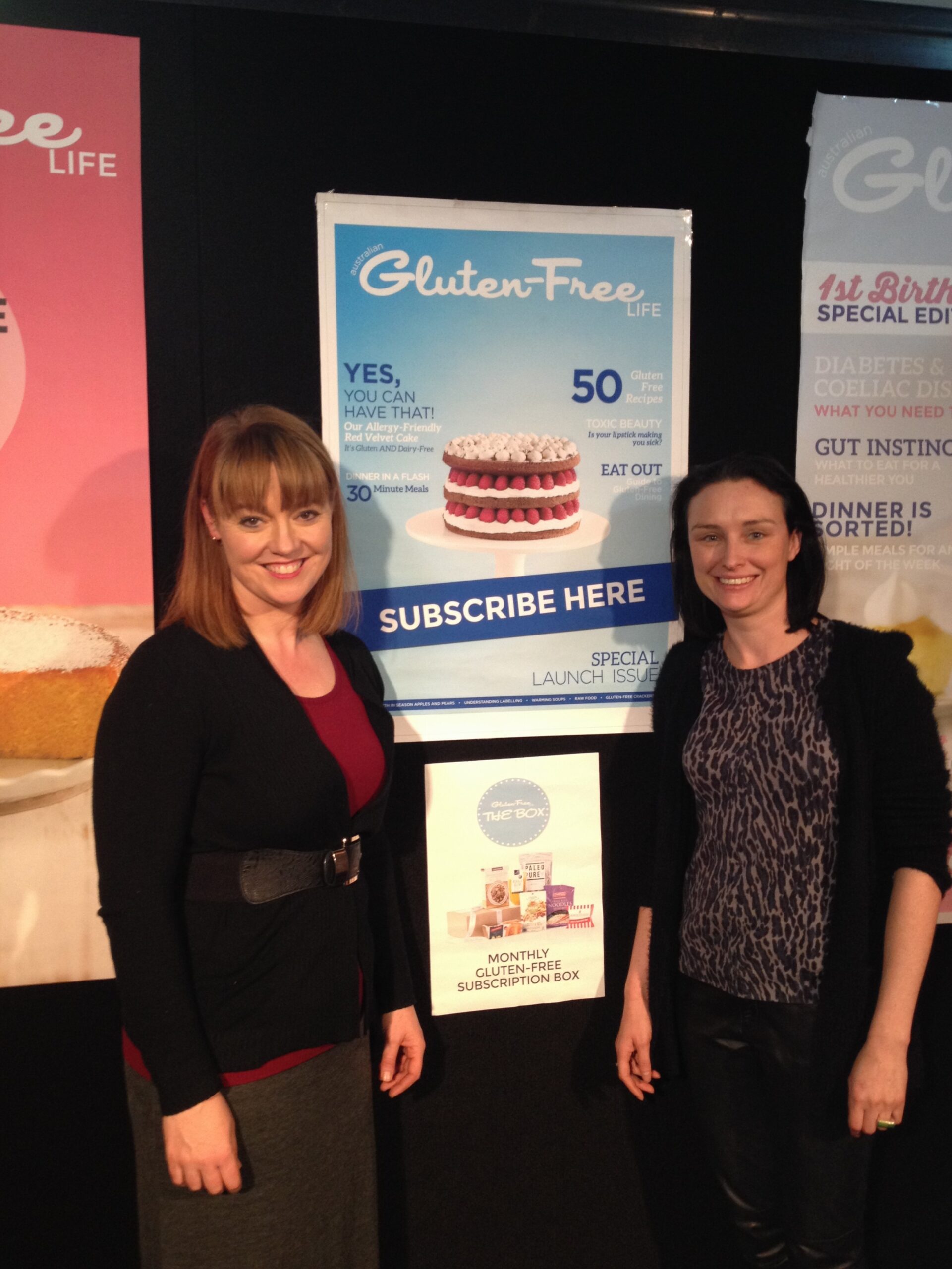 For quite some time now, I’ve had a bit of an association with Cara and Bart at Australian Gluten Free Life Magazine. In fact, they ran a lovely story about my Coeliac daughter and I in their second issue last year. As luck would have it, they were exhibitors at the Expo. Finally we got to meet in person, which is always brilliant – it’s a thrill when the virtual world becomes real! And they were so absolutely lovely and delighted to be in Adelaide. They were genuinely impressed by the huge crowds, who snapped up almost all of their magazines. The photo above shows Cara and I with the poster of their very first cover, which is still my favourite. 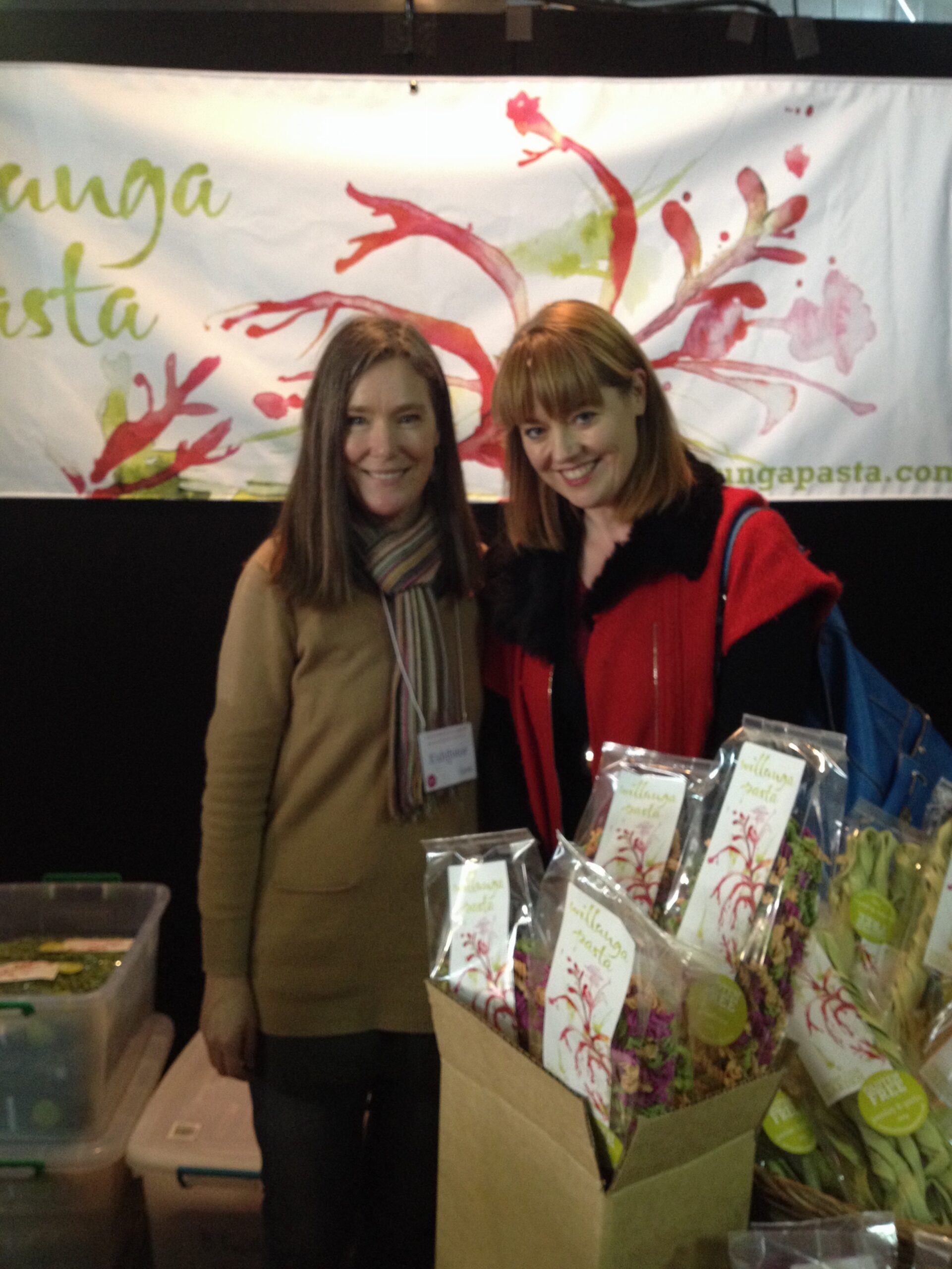 I also met Angie from Willunga Pasta. Angie and I have had a bit of email contact over the last 18 months or so, so I was really excited to meet her, especially because her pasta is hands down the best gluten-free pasta on the market. HANDS DOWN. And she’s so lovely. Her pasta comes in amazing natural colours and flavours: plain, spinach, beetroot, chilli and garlic, parsley and garlic. Needless to say, I stocked up. My kids love her pasta, especially the spinach fettucine. But the rainbow penne is also a favourite.

After all that socialising, I didn’t have much time to check out too may other stalls, but I did make a few happy discoveries. Geraldton Hill Farm has some gorgeous handmade chocolates – I bought some chocolate almond toffee logs to tuck away for Fathers’ Day. And they’re a South Australian company – even better.

I also found Your Inspiration at Home, a fundraising company that produces spice rubs, dip mixes, marinates and other food products that really boost the flavours in your food. I bought the guacamole dip mix which is a herb and spice blend. Just add avocado and sour cream for a memorable guacamole. Can’t wait to try that, but in the meantime, I’ve sprinkled it over meat and vegetables and by jingoes does it take it to the next level!

I had a great time at the Expo – it was a fantastic experience to be demonstrating and presenting but also to meet so many gluten-free identities. Here’s hoping there’s another one!

This is an unsponsored post. All opinions are my own.