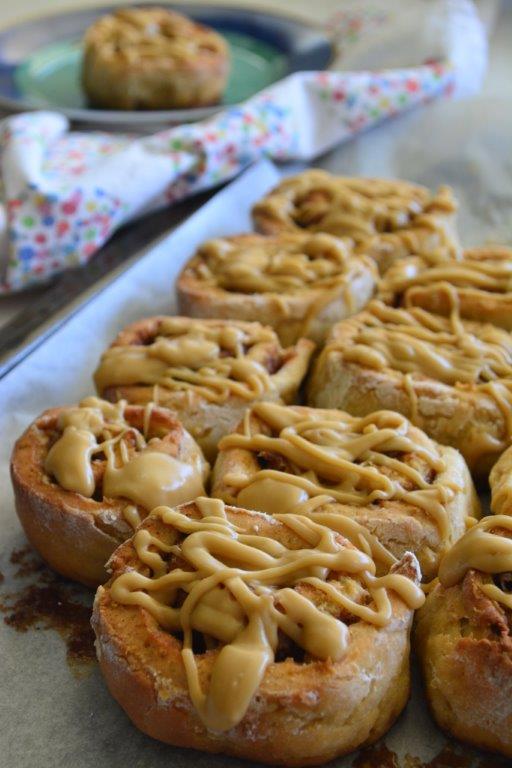 The art of the scroll has eluded me for quite some time, mainly because I don’t have the right touch with bread-making. Not long ago, I published a recipe for Cheesy Pumpkin Scrolls. It was a victory of sorts because I finally figured out how to do it.

The trick is to use a pizza dough mix rather than a bread mix. Because pizza dough has to be moulded into shape, it’s much closer to the kind of consistency you need for these gluten-free cinnamon scrolls. I used Bob’s Red Mill Gluten-free Pizza Crust Mix. Not only does it work like a charm, it’s also stocked in my local supermarket.

I’ll be honest, there’s not much nutritional value in these scrolls. You could probably boost it by throwing in some seeds or psyllium husk, but this recipe is about settling an old score. It’s about recreating something my gluten-free daughter hasn’t been able to enjoy since her pre-diagnosis days. And I don’t normally send iced baked goods in the lunchbox, but an exception every now and again is just fine.

No gluten-free cinnamon scroll is complete without coffee icing drizzled over the top. I used decaffeinated coffee, because I didn’t fancy my kids bouncing off the walls after eating one. But you could use full- strength coffee if you like, or no coffee at all (just be sure to add the water to your icing mixture, otherwise you won’t get the right consistency.

And the verdict? Unanimous thumbs up from my family, and I love them too, because they freeze and defrost  so well.